Happiness is something we all strive for in life. It gives us a purpose that always rewards.

For Lord Daigo in Dororo, his happiness comes from absolute rule. He loves to see his people flourish under his reign with no troubles weighing on his mind. But when everything falls apart as war, famine, and illness invades his lands, Daigo searches wildly for something to return what he has lost. His gods and Buddha fail to give him what he desires, and he rushes off to the Hall of Hell to make a deal with the demons, even if it means condemning him to hell. He cries for them to protect his lands and restore his rule, and in exchange they can have anything of his. The demons agree, and as soon as he returns home, they take what they want: his newborn son. They steal his son’s limbs, skin, eyes, nose, and even the ability to feel pain. With his sacrifice, the lands return to their flourishing nature, strong allies help protect their borders, and the illness disappears—all at the cost of a single baby boy.

Like Daigo, all of us want to find happiness, even if it we need to go to great lengths to meet it. Just think of how easily we can escape reality with our phones. These electronic boxes hold an oasis of information, social media, games, books, movies, videos, whatever we may crave. Just pop in some earbuds, open your favorite app or web browser, and let your mind get caught up in the digital world. With so many ways to find happiness, it’s easy to forget that what we find happiness in will always fail us. Phones will break and their batteries will die. A favorite sports team will fall to a terrible losing streak. Then we begin to see the consequences of relying on earthly things.

Dororo shows us as much. Hyakkimaru, the son Lord Daigo abandoned after he was sacrificed to the demons, is saved by a lonely man named Jukai who happens to find him. Jukai gives him prosthetic parts and teaches him to fight so that he can survive. One day, after killing a demon in the woods, Hyakkimaru experiences the painful regrowth of his missing leg. 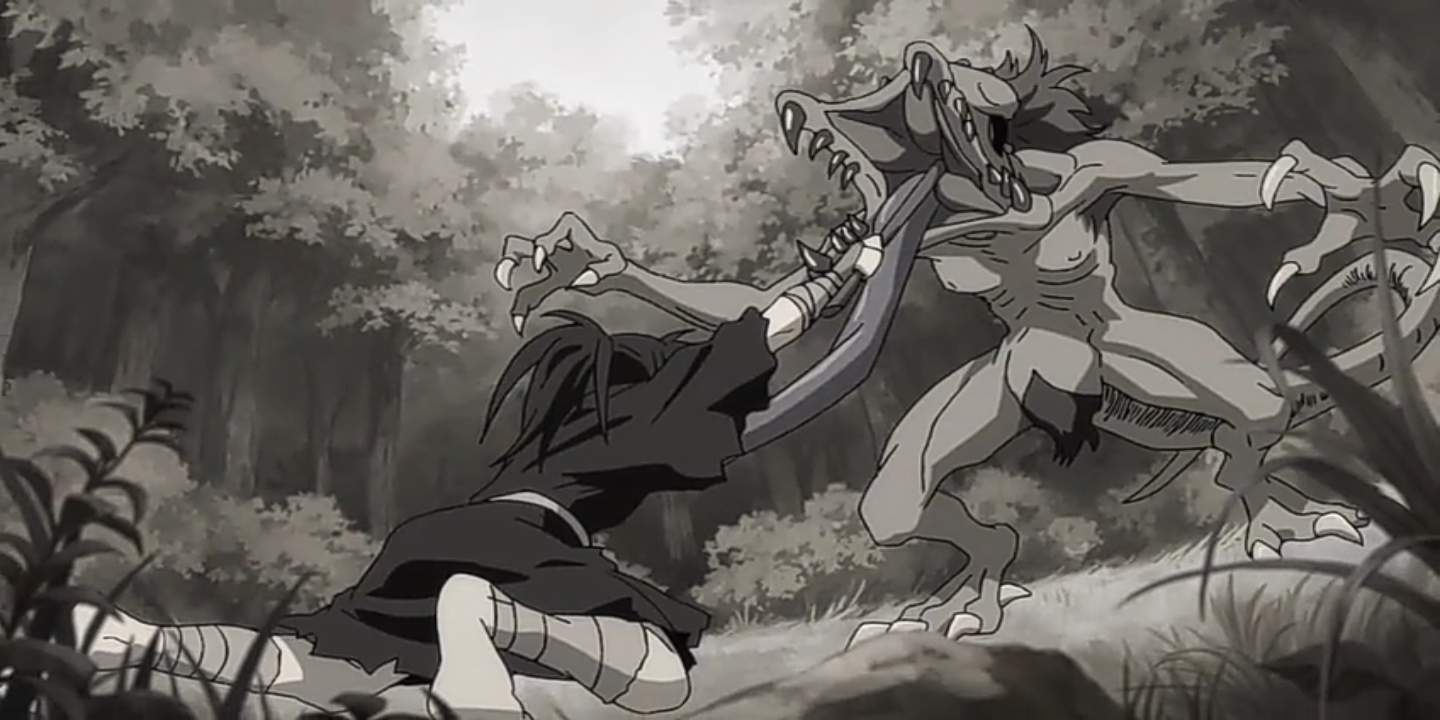 It is revealed that if he kills the twelve demons who stole his body parts, they will be returned to him. However, the more body parts he retrieves, the worse situations grow for Lord Daigo and the people. As Hyakkimaru and his new companion Dororo travel to defeat these demons, war begins to creep in past the borders and more violent forms of death return to his people. Captive soldiers undergo gruesome torture and gory deaths. Families that manage to escape the violence are trapped, struggling to survive starvation and mistrust. Because they all put their trust in something that can’t guarantee their happiness, they fall into pain and despair.

Even if we are not faced with such a large consequence for relying heavily on something, we still will suffer like the people did. In a world of advancement, we are in constant search of things that bring us ease. Once upon a time, we had to step outside and head to the store to pick things up; now we can stay in the comfort of our own home and have things brought to us through a vast amount of online services. We constantly crave the next new, big thing that will improve on the last, such as a new phone with longer battery life and more durability. With all this around us, it’s so easy to think we’ve found happiness on this earth. But when we are faced with losing what gives us happiness, we desperately search for something to fix or replace what we lost.

It’s always been easy for me to distract myself with earthly pleasures, especially during the school year. I grow stressed when homework, papers, and studying for tests build up on top of each other, with math particularly being a challenge for me. I’m quick to run to things like movies, books, and art—anything that’ll distract me from feeling burdened. For a few moments, I escape from the struggles of the world. However, as soon as those moments are gone, I’m dropped right back into all my struggles. My happiness was only temporary.

Luckily, Dororo doesn’t leave us despairing over how to find true happiness: We need to rely on God. At the end of the series, Hyakkimaru is met with a choice. He can either continue down the violent path and become a demon himself, or go down the other path, the path of Buddha. This is the path his mother chose, especially after the statue in her room sacrificed its head to protect her son. This is the path that Hyakkimaru ultimately takes, and he begins to seek a peaceful life away from all the violence.

While we Christians don’t believe in Buddha, Haykkimaru’s submission still holds provides strong message for us: Rely on the true God, who teachings are greater than Buddha’s or that of any other earthly teacher. Trust that he will be with you every step of the way. Only God can grant joy. Yes, there will be hard times, moments when you think that he’s not there, but he is. He’s waiting for you to return to his presence. Psalm 46 reminds us of this, proclaiming that God is our strength through trouble, and that we won’t fear for he is with us! And who can fight the will of an all-powerful God?

Dororo is a beautifully animated series that will break your heart. It gives you a peek into the lives of people during war, showing the struggle, pain, and sorrow that comes with it. It tells the tale of two traveling through these hard times searching for the bit of hope that flickers in and out of view. And it should serve as a question to us all: What or who do we rely on the most for our happiness?

Dororo (2019) can be streamed on Amazon Prime Video.

One thought on “Happiness, Demons, and Dororo”

Beneath the Tangles @animetangles ·
4h

Beneath the Tangles @animetangles ·
6h

The Courage of Bocchi the Rock, Or Free Will & How to Use It Well https://bit.ly/3WP1SMr #ぼっち・ざ・ろっく #BOCCHITHEROCK #BTR

[joseph] Thorkell is back!!! Who doesn't love this