The tragic attack on Kyoto Animation was a shock to us all. I felt devastated as I read the reports, but turned a bit toward hope when I came upon the fundraiser. The people who created many of my favorite anime, such as Violet Evergarden and Tamako Market, were now reeling from the loss of 33 people, many more injured, and their studio and work destroyed. But despite how overwhelming the tragedy is, I find it strange that in the midst of it, I failed to consider the profoundness of death.

Yes, I think of death because it has happens to others, but I don’t actually take it seriously. It’s merely a word, something I largely ignore because it doesn’t affects me directly.

I’m completely guilty of ignoring death. It’s something I push to the farthest corner of my mind and forget about. Whether it be when my favorite character from a movie dies or the in-game character I control is killed, I never actually think about what death is, and what comes after it. Death is so easy to sweep aside, but when it comes to take a loved one away from me, I am terribly surprised. It convicts me of how much I cling to worldly things to distract myself.

One series that causes me to dwell on death and reminds me of my frequent ambivalence to it is Angel Beats, a dark comedy about students living in an after world. It begins when high school student, Yuzuru Otonashi, wakes up in this world to find that he is unable to remember who he is. He is then recruited by a girl named Yuri and dragged into helping her and her fellow students in the fight against their enemies—Tenshi, or “Angel,” and God. As they fight in order to not disappear, Otonashi uncovers the truth: They are all dead and now reside in a sort of limbo world.

Even at the beginning of the series, a reflection of our ambivalence shines through. Yuri, the stronger leader overseeing the students in their fight, is also the who has the strongest emotions against their situation. She explains her anger through the story of her life and death. She was the big sister of the family, and felt that it was her responsibility to take care of and protect her younger siblings. One day, while her parents were away, a pair of robbers invaded her house. Unable to find anything of worth, they forced her to search for them. They threatened her, telling her that every ten minutes, they would shoot one of her three siblings if she didn’t return with anything valuable. By the time the police arrived, 30 minutes had passed and only she was left alive. 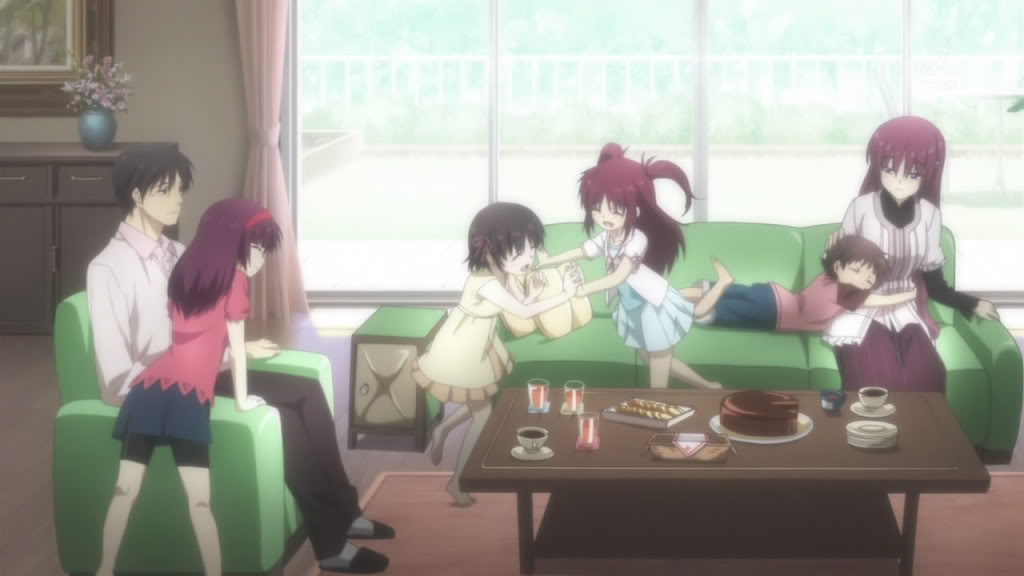 Yuri feels responsible for their deaths as a big sister. She wants revenge against God for such a cruel twist in her life, unable to accept that such a thing could happen to her. I understand her rage at how unfair things may seem. Yuri’s case is devastating, but any death is painful. Like Yuri, we might turn our rage towar God and blame him for our loss, even though sin is what brought about death. Though death brings sorrow and pain, it should not be hidden away in our hearts.

It’s important for us to accept that living things are fated to die someday. By doing so, we will return to reality. By accepting death, we will be able to break free from the anxieties of the world because we no longer have to worry about finite things. Instead, we will be able to look forwards to the infinite: our life after death with our Savior, the One who died to set us free from sin and death.

Angel Beats is a bittersweet tale about life, death, suffering, and peace. Each character faced a life full of hardships, but in the end, they were all able to at last accept the lives that they lived and that they had eventually came to an end. We, too, should accept death, and keep our eyes on the eternal life afterwards. No matter what hardships we may face, we should never forget about our God who rescued us from death and hell, not for this finite life—but for the one to come.

Beneath the Tangles @animetangles ·
14h

Beneath the Tangles @animetangles ·
15h

The wisdom of an egg yolk. 🍳 I think that Gude

With such a massive number of series available to

[joseph] Anetoro is a fun addition to really throw